I started watching ABC’s The Bachelor when Sean Lowe was looking for his soul mate. My mom had been a fan for several seasons and had repeatedly asked me to watch it with her. Being the daughter who always tries to please her and not having anything better to do that night, I did. Much to my chagrin, I have been viewing it with her ever since. As fate would have it, a show that is painful for me to sit through for two hours, is the one thing her and I can talk about without arguing.

Speaking in Bachelor lingo…. it’s “amazing” to me how tolerant she is of all the instant “connections” (aka kissing) going on. Not even to mention the stuff happening in the fantasy suite. Where was this open minded mom when I was dating??? To be fair, she is not a big fan of the over nights and liked it better when she could pretend that it was just a sleep over.

But I digress. The fact is, my mom really likes watching this show and truly enjoys having me share it with her.

So imagine how excited she was when she found out ABC was holding The Bachelor Auditions at The Festival Flea Market in Pompano Beach.
She told me I had to go and call her with all the details. I haven’t seen her that enthusiastic about anything in such a long time, so of course I went. 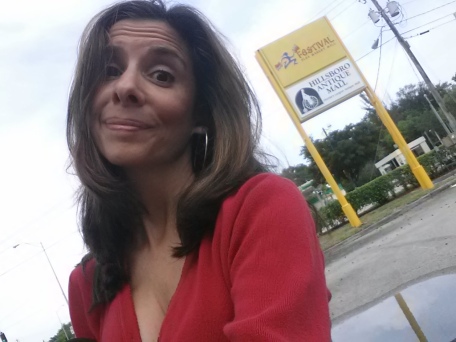 The event itself was being held right near the food court. They had the contestant hopefuls corralled off in a section where those walking by could gaze upon them as the hopefuls waited patient for their turn at true love… or lust…or stardom… I’m not really clear as to which one.

The lines were long, the girls were constantly primping and the lone man just sat there watching. I wanted to scream “Dude! There are single girls ALL around you, get up and go mingle. You are sitting in a live e-harmony commercial. It’s like shooting fish in a barrel!”

Each pick me auditioner was given a number and then prodded up one by one to stand before the photographer with their information on a dry erase board displaying their full name and number. Not such a great idea when you have a bunch of guys with cell phones standing on the side lines taking photos. Just saying.

After an hour, I’m fairly confident if someone had said to me “Will you accept this falafel? I would have found my true love. I wonder how many of these girls brought flasks??? I mean seriously… there is a lot of waiting around. A girl is gonna need something to keep her giddy.

Just before my departure I saw a more seasoned lady stand up when her number was called. She was obviously delighted it was her turn and even though she knew the odds were stacked against her, she was still willing to go for it. Oh, if only there was a show that featured singles 40 and over. Now that would be entertaining!

Like a good daughter I called my mom on the way home to feed her addiction.  Eagerly she asked me if I tired out. Me? Really? Hmmm…. a chance to relive my college years of drinking, traveling and kissing lots of hot guys. Why not??? Chris Harrison, call me maybe.

2 thoughts on “Will You Accept This Rose?”