When I was invited to participate in a tasting at The Little Chalet the first thing I pictured was a quaint little house nestled somewhere in the Swiss Alps. Turns out I was almost right.

The restaurant is an adorable dwelling that resides on the West side of Federal Highway in Boca Raton.  Although there was no snow, once I entered through the front doors, I couldn’t help feeling I had been whisked off to some far away mountain top.

The interior  is dark, yet welcoming with the light fixtures casing a soft glow upon the wooden décor. I dare say it is the closest thing to a high-end ski resort we would ever see here in sunny Florida. 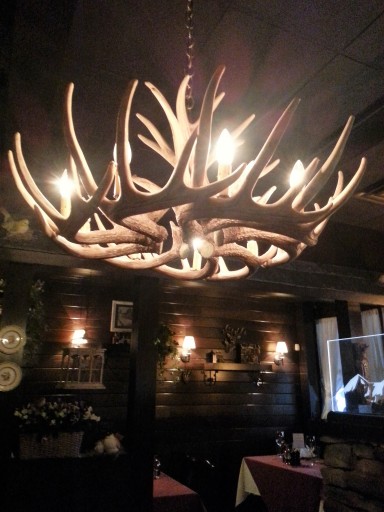 There are several rooms to decide upon, each with their own charm. If you care to be more secluded you might want to choose one of the table for two booths in the bar near the piano player quietly playing all your favorite tunes.  However, if you desire to be seen, there is a room filled with light from a wall of windows that also happen to open out to let the night breeze in.

Or you could choose to sit right next to their wine cellar for a table with a different kind of intoxicating view.

Also for your viewing pleasure, there is a fireplace that I was hoping would be set ablaze, a piano player tickling the ivories, and a beautiful wood bar with comfy chairs and plenty of bottles to choose from.

Once our party was comfortably seated we were presented with warm fresh bread and a spiced flavored olive oil to soak into the nooks and crannies.

After that yummy pre-starter, two appetizers were placed before us. The first being Roasted Brussel Sprouts.

The highly popular veggie is sprouting up everywhere these days.  Here, the chef has paired them with cubes of chorizo sausage and roasted golden beets. All of which were sprinkled with manchego cheese and a piquilla pepper vinaigrette. The sprouts were crisp, yet tender and melted in your mouth while the beets were like a roasted potato but with a slightly sweeter flavor.

The second  pre dinner fare was Pan Seared Scallops. These treasures of the seas were quite good although perhaps a bit too much pepper for my taste. Seared and sitting on top of a sweet and savory succotash of roasted corn, lima beans, and crispy pancetta, they happily played well together. The lemon jalapeno butter it was cooked in added a pleasant dash of heat. 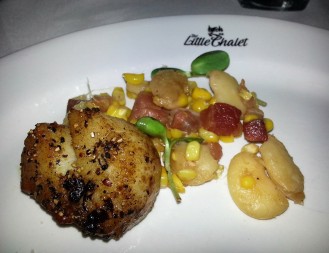 Next up was a treat off the “special of the day” menu.  Simply named ‘Wild Mushrooms’ this eclectic dish decorated the plate with several types of mushrooms, leeks, artichoke hearts, pieces of pork belly, pecans and almonds. All of this was sautéed with a bourbon glaze and then topped with a sous vide egg. Which is a fancy way of saying a very, very slow-cooked egg. 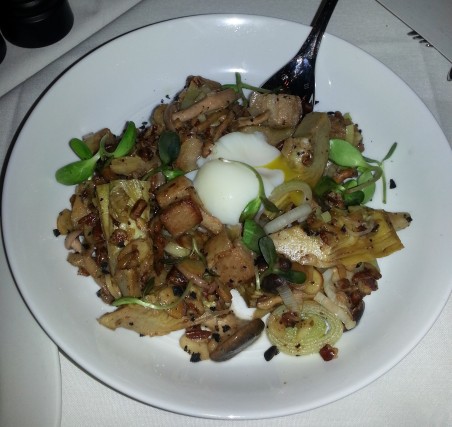 The whole point is to gently break the egg so that its golden center oozes all over every morsel creating a slightly sticky, slick coating on each bite. Without the egg I’m sure it would have been quite good, but with the egg…. it was beyond yummy.

For this VIP tasting, we were then given the pleasure of sampling three main courses.  Short Ribs, Duck and Bone in Filet Mignon

The braised ribs nestled into its goat cheese smashed potatoes quite nicely.  There was plenty of beef gravy to ladle on top of both the meat and the wild mushrooms that surrounded it. I personally would have liked the gravy offered on the side so that the potatoes didn’t soak them up as much as they did, and  is exactly what I would ask for should I order them again.

A cauliflower puree bedded the confit of duck leg which lay partially hidden underneath a fried duck egg for the second entrée. The meat and accompanying broccoli rabe had been drizzled with a port and cherry sauce. Again, once the yolk has been released an oozy golden glaze paints its taste on to everything it touches heightening the flavors from good to grand. 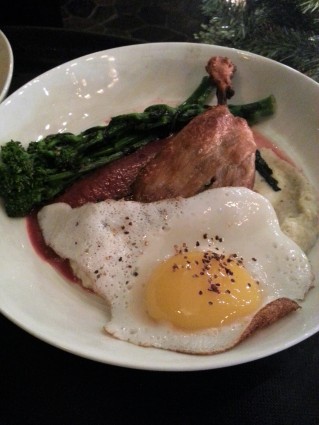 The filet mignon was both simple and delightful making it easily my favorite dish of the night.

The meat was so tender you could feel it melting in your mouth.  Perfectly cooked medium rare deliciousness drapped with a Syrah sauce. You could certainly taste the deep flavor of the red wine lingering on your tongue from the dressing which also helped the potatoes from losing their place on the plate .   Towering on top like a piece of edible artwork was a maitake mushroom tempura.  Unfortunately it was snagged by a table mate before I could sample a taste.

Of course all meals need a sweet ending and what is better than a chocolate fondue?

Especially when the warm chocolate sauce comes in three flavors.  They have milk, dark and peanut butter chocolate for your dipping pleasures.  As if the bite size fruit, rice krispies treats, brownies, pound cakes and marshmallows aren’t enough to dunk, they also give you a full size Lorna Doone cookie!

The Little Chalet really is a lovely little cottage that is both warm and inviting with its atmosphere and it’s food.  If you are looking for a romantic little getaway, then why not invite your sweetheart to dine at The Little Chalet? 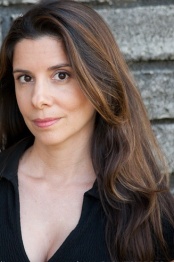